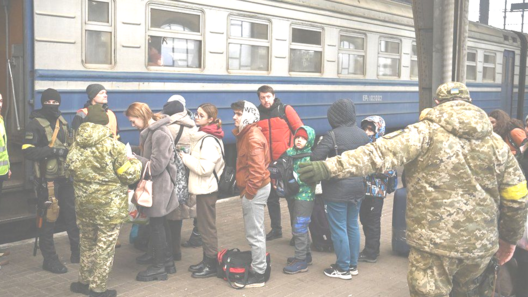 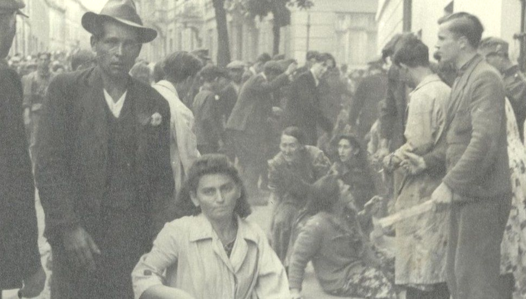 'IT IS TERRIBLE': FOR UKRAINE'S JEWS AND ROMA, WAR
REVIVES OLD TRAUMAS

Lviv's Jews were targeted during a violent pogrom, encouraged by Nazi occupiers, in 1941, BBCi

Hundreds of Ukrainians are leaving Lviv on trains to Poland. All day and all night the trains roll into Lviv's vast central station, a place of departures throughout this city's long, traumatic history. In the carriages taking soldiers east to war, groups of young men sit with pensive expressions. There is no comradely laughter or joking. They read messages from wives and girlfriends or watch the war footage flooding social media.

These are men heading off to fight against immense odds.  A soldier approaches after saying farewell to his wife. "What you see, all these women and children. It is a tragedy," he says. "Tell the world and see if they care."

On the westbound platforms, the refugees huddle in crowded corridors and stairwells hoping to board trains that will take them to safety in Poland, Hungary or Slovakia.  Among them are groups of Roma Gypsies who come from Kharkiv, where Russian shelling is killing civilians. Like everybody else they fled only with what they could carry, an assortment of holdalls and rucksacks.

In Lviv, these scenes summon up the restive ghosts of Europe's past. The city is filled with people whose parents or grandparents experienced genocide and totalitarianism in the last century. Tens of thousands of Roma were murdered by the Nazis during World War Two.

One Roma grandfather of a family of seven tells me the war has destroyed their lives. Pavel, in his late 60s, described a scene of chaos in Kharkiv.

"Everything is burning. Everything is destroyed," he says. "No one is listening to us. No one wants to help us."

Lviv was also the scene of one of the most brutal pogroms of the Holocaust, in which thousands of Jews were brutally killed by the Germans and their Ukrainian collaborators in the summer of 1941. By 1945 the pre-war Jewish population of around 100,000 had almost vanished.

Among them were the families of two Jewish lawyers, Raphael Lemkin and Hersch Lauterpacht, who laid the groundwork for much of modern human rights legislation. It was Lemkin who introduced the concept of "genocide" into international law.

Now there are an estimated 1,500 Jews living in Lviv. It is thought many have already left to seek safety outside Ukraine.

At the city's Jewish Centre volunteers are catering for families uprooted by the invasion. Children chase each other while volunteers pack food and blankets.

It is also a place of comfort for the few remaining Holocaust survivors in Lviv. I met Tatiana Zabramnaya, 84, who remembers a childhood in a home filled with unspoken trauma.

"I asked my mum about the war - what, when and why - but she could not talk about it without trembling, without crying and asking not to reminded about the war. My uncle and my aunt were in Kyiv and my mother told me they were shot."

Her daughter lives in Kyiv with her husband and adopted son. Tatiana says they are now trapped in the capital. Struggling to speak through tears she asks: "Who would have thought that like 22 June 1941 we would be invaded again, but from Russia? It is terrible."

The two wars - then and now - are very different. This is not a question of trying to make exact historical parallels. But for those like Tatiana who bear the emotional wounds of history what now engulfs Ukraine revives old anguish.

And there is the thought, watching the endless flow of refugees and their children, that a new generation will carry the burden of traumatic memory. --BBCi